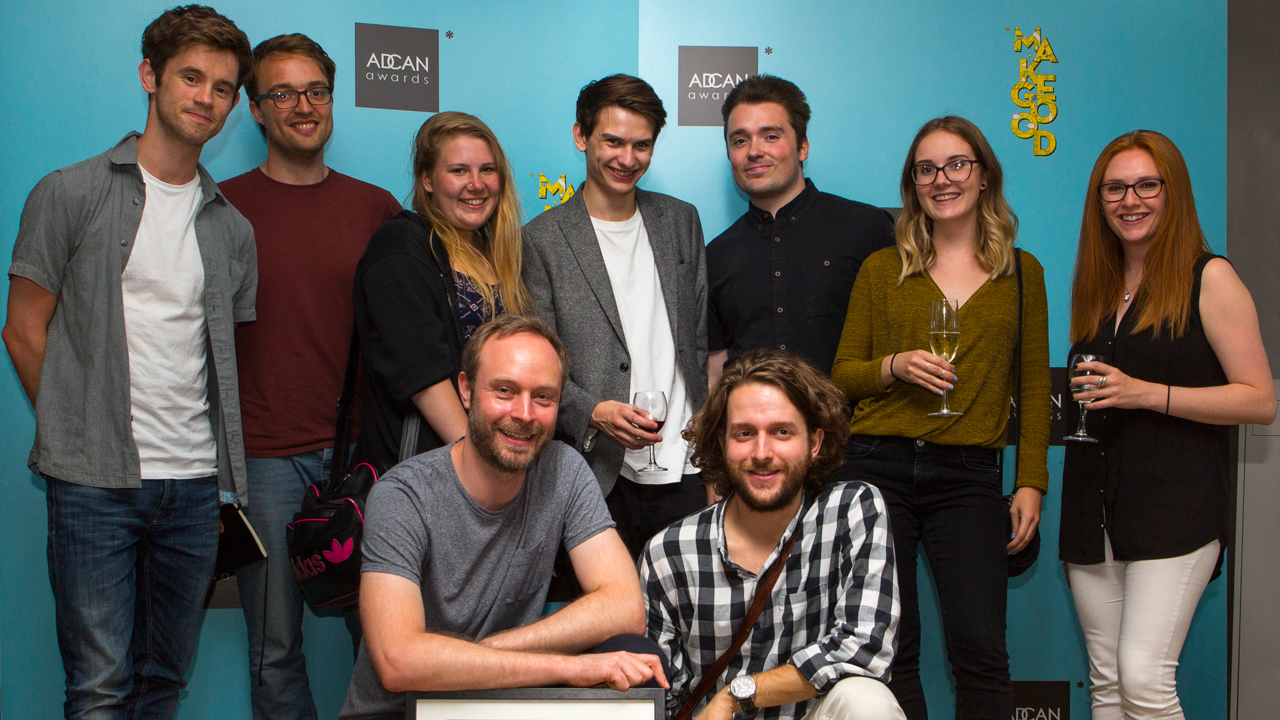 ‹ Back to List
August 31st, 2016
Share
The Mill’s London studio was thrilled to host this year’s ADCAN Awards, which champions up and coming creative talent and provides charities with original content to help promote their cause.

Now in its third year, ADCAN was established to 'make good’; creating a movement to encourage the film and advertising industries to make a real difference. The free-to-enter film competition offers up-and-coming directing talent the opportunity to launch their creative work for good causes.

This year’s entrants were tasked to select from one of four charity briefs from Nordoff Robbins, The Girlhood, Streetbank and CALM and create a 30 second film, which helps to spread the charity’s message in a unique and interesting way.

This year ADCAN received double the amount of entries across a range of creative mediums and narrative styles. The entries were then narrowed down to a shortlist of 14 with one for each charity being chosen as the winner on the night.

Much more than simply an awards ceremony, in return, those submitting work and ideas were offered the chance to meet directors and producers from Partizan, Rattling Stick and Nexus, and the finalists also attended two days of exclusive industry access workshops including an edit session at Work, the chance to try out the latest kit at ARRI Rental, join Wave for a tour of their amazing Dolby Atmos suite as well as a master class in post production here at The Mill.

This year, for the first time, ADCAN also introduced a ‘People’s Choice Award.’ Chosen live by guests in attendance at the awards show, the award was given to Klaas Diersmann for his fantastic film ‘(T)HUGS’ in response to the brief set by charity CALM. It seems that this year’s ADCAN Awards judges from Partizan, Rattling Stick and Nexus were also in agreement as Klaas was then announced as the overall Grand Prix Award winner.

We caught up with Klass to find out a bit more about him and his winning film 'T(HUGS)':

Tell me a bit about yourself and how you got into filmmaking?

I always aspired to work in film and make movies but I suppose my path wasn’t that direct. I grew up in a small town in Germany and after school, started studying Medicine in Hamburg. After two (long) years I then changed to study Graphic Design, finishing my degree in the UK, where I was lucky enough to be named the D&AD student of the year for an ident I filmed for MTV. I then started out working in animation and visual effects in London before focusing more on directing; firstly music promos and idents, a few commercials, then documentary and short film projects.

How would you describe your style?

I find it hard to pinpoint a specific style in my work as I continue to explore and experiment with different genres, styles and storytelling techniques.

I like to create cinematic imagery, which often calls on my background in VFX to tell emotive stories, which I hope, are unexpected and entertaining.

How did you interpret the brief from CALM?

The crux of the brief for me was how we could change the perception of masculinity to get men to talk about their issues and help them to escape their predicament, and to do this with an unexpected, disruptive and somewhat refreshing element of humour.

I didn't want to do a voiceover in order to explain anything and was determined to tell a complete visual story in just 30 seconds with an unexpected twist at the end, in order for the film to finish on a positive and encouraging note.

Gangster movies are a particularly masculine stereotype in British cinema, which I felt that men under 45 would respond to. Think of Guy Richie's movies, you see all the complexities of their masculine gang warfare but you never see any complex character development, you don't see these men behind closed doors dealing with emotional issues – this is what I wanted to play on.

It was fun to think of the stereotypical situations and emulate iconic gangster scenes such as the Tarantino boot of the car opening, the 'tooling up' of the gangsters (which can be seen in the extended 2min version of the film) and the inevitable 'chat'... you're building up expectation of violence but then taking the audience somewhere entirely different. You (hopefully) don't see the charity message coming, which was really important to me.

The gangster genre also functioned as a powerful metaphor – the guy being gagged and unable to speak symbolises how men can often feel trapped by their own dark thoughts and unspoken emotions.

Film as a whole inspires me, as it’s the modern day medium of communicating and encouraging complex ideas, issues and emotions.

I get inspired by films that touch me on a number of different levels - like the German film ‘Victoria’, it really left me on the edge of my seat and took me through so many different emotions.

Jonathan Glazer’s unusual observational viewpoint from an alien on humanity in Under The Skin touched me in a weird way, I don’t even know how to describe it - it really stayed with me, as do the films by directors like Haneke, Kubrick, Winding Refn, Lynch and Fincher who are not afraid to go to dark places.

On the contrary, I grew up with the humour and comedy in Jacques Tati’s Playtime, it’s really show and not tell -slapstick at its best. Conversations are drowned in the surrounding sounds of the scenes. I’m amazed how he finds the comedy by observing human behaviour - how we as human beings interact with each other and the urban ecosystem that we created and live within.

Beyond film, I often find myself daydreaming for inspiration. Listening to music opens a lot of associations that inspire me, as does traveling, reading, and just chatting with friends.

What’s next for you?

At the moment I’m developing a range of short film projects, from sci-fi comedy to suspense drama, and I’m writing a psychological thriller feature film set in South America with the support of BFI-backed programme Screen Arts Institute.

I’m very keen to explore the narrative possibilities of VR and am co-developing a live action neo-noir short film specifically to work in VR.

A huge congratulations to all of the evening’s winners! For the full shortlisthead to the ADCAN website.