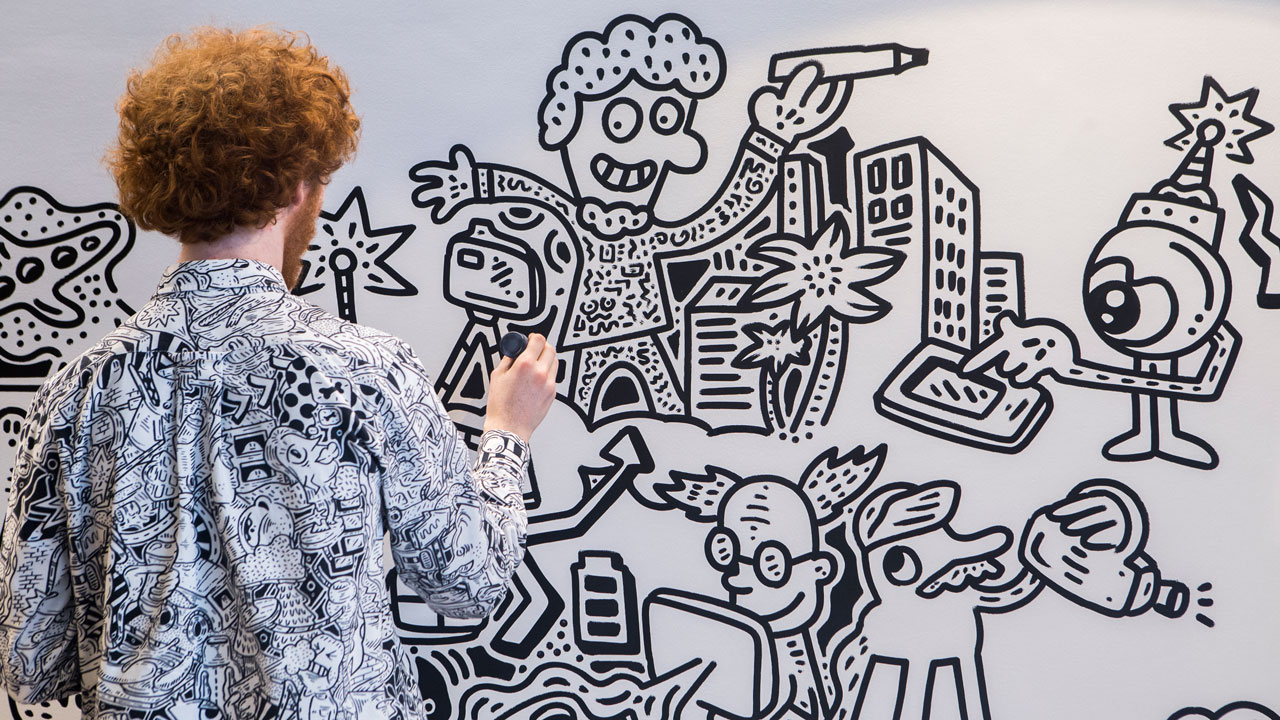 ‹ Back to List
June 7th, 2016
Share
What better way to launch The Mill: ART Space than with the creation of a doodle mural from Sam Cox a.k.a ‘The Doodle Man’?

Sam came in for a lunchtime session to discuss his craft and then spent a day doodling on our Ground Floor Kitchen wall creating a bespoke Mill themed design - we caught up with him, post a day of penmanship to find out more….

When did your love for doodling start?

Ever since I can remember! I have always loved making things so I enjoyed any kind of activity where I could create something of my own. Drawing is one of the most accessible of activities to do and you can do it anywhere. If I was at a family gathering or on a long car journey for example, I was still able to carry on drawing. Even now, I see people walking along the street on their phones but instead I’m the guy walking along doodling in my sketchbook.

My love of drawing started at school, although art definitely wasn’t my favourite subject. Whenever we had art class at primary school we were made to paint vases of flowers or bowls of fruit which I just wasn’t interested in, instead I was more likely to be found drawing in the margins of my maths book. I clearly remember the task of drawing the person opposite you and it was really embarrassing as they just ended up looking like a cartoon and not even a good cartoon!

At A-level I was able to choose Graphics as a focus and was given freedom to specialise. This allowed me to do a bit more of what I wanted and what I was interested in which really helped me in finding my own personal style.

How did you get into drawing?

Actually, a lot of it was as a result of playing video games. I really wanted to make my own game and the closest thing you can do is to draw a level so I used to do that to get it out of my head.

I also watched a lot of Captain Caveman and Wacky Races and then started trying to copy the drawings of them. I found it easier to draw those types of characters as they were made up of shapes and graphics. But, as is the case with many people, something naturally feels easier if you want to do it.

Tell us about some of your favourite projects you have worked on?

Pancake Panic was one of my favourites - I once covered the whole of my kitchen in white paper and drew all over it for Pancake Day. I couldn't cook any food (or pancakes!) as I had covered every surface in doodled paper so I lived off microwave meals and takeaways for 9 days.

I also recently worked on a project for World Child Cancer Charity at The Moosey Art Gallery up in Norwich. The whole gallery space was covered in paper and I doodled all over the walls, ceilings and floors for 48rs straight. Afterwards, the finished doodle was cut and divided into A3 pieces and sold for £10 each, with all sales going to the charity. It was a long 48hrs but a lovely project to work on and luckily there was a café connected to the gallery so I had people bringing me tea and coffee to keep me up!

Back in February I also transformed a whole construction tunnel on Great Eastern Street in Shoreditch, which was such an amazing space to fill. I love drawing in contained spaces as it almost becomes like an immersive art installation. Spaces like this are hard to come by as you would often have to get permission and pay a fee, but luckily it’s a really good time to be a street artist in London at the moment with platforms such as Global Street Art organising wall space for artists to make their mark.

Tell us about the Doodle Man as a brand and how he has evolved?

I actually got the nickname of The Doodle Man from my tutor at uni. I started to take pictures of myself drawing in situ and one day created a pair of doodle trousers and shirt for myself. My tutor took a picture of me one day and put it on Instagram with the caption 'Sam Cox, The Doodle Man ready to start a days work…’ and the name just stuck.

Early on, I began by making a parody of Mario the video game, which ended up becoming my own version of ‘The Doodle Man video game’, and with each project I developed, the Doodle Man just continued to stick. It’s such a simple name but it works and anyone can get it. I like to make my work really accessible but still being clever with it. I’m not a fan of when art becomes too pretentious or exclusive and I love the fact that my grandparents can still look at my work, enjoy it and have a laugh at it.

Storytelling is now a big part of The Doodle Man and his story is continually evolving. I was influenced by Graham Rule and how in his books he speaks of all good heroes having obstacles. I started developing storytelling techniques and creating more and more stories and scenarios for The Doodle Man. I think in a way he sounds a bit like a superhero so naturally he needed an enemy, which is where the evil twin comes in, drawing in the negative to The Doodle Man and trying to put a stop to his doodles. Some people actually think the ‘evil’ twin is the good guy whereas The Doodle Man is the villain trying to take over the world with his doodles.

Some of the most simple ideas are the best ideas - someone once mentioned that I should get a Doodle Dog so now I have one and it’s great as I can show people pictures of him just as people do with their own pets.

I’m continuing to build on the storyelling theme, with each character adopting their own way of drawing and their own individual style. I’m in the process of creating a Doodle Girl who might be the solution to adding a colour element to my work. Watch this space…

Who / what inspires you?

Loads of my work stems from the video game Crash Bandicoot; I really loved that as a kid. My parents were also a huge inspiration from an early stage. My dad quit his job at the bank and started running his own business – being surrounded by this entrepreneurialism made me realise that I really wanted to do something that I was passionate about and could run myself.

Art Attack was also a big thing for me. Bob Ross doing painting on TV really inspired me from a young age as well as of course, some of the big names such as Picasso, Andy Warhol and Hundertwasser. I also had some really good teachers at school who offered lots of support and encouraged me to follow my love of doodling.

What would you most like to put The Doodle Man stamp on?

Something like an aeroplane would be great but I think the dream for me would be to create a Doodle town – I could spend two years away just painting the whole town for people to come and visit. Or… I could be the first doodler on the moon.

Talk us through The Mill: Art Space mural

I had a great time doodling at The Mill - I drew lots of different characters and elements that hinted at and were relevant to the company. For example- guys wearing VR headsets and dreaming they were astronauts or superheroes, characters on computers creating and editing videos, and creatures who are crawling on digital tablets to design visual effects.

All of these situations could be shown through photographs or devices, but you can really have fun with presenting this mix of subject matter when you doodle it into a big cluster of content. I had a lot of fun, making the characters look silly and playful, and I always enjoy taking specific themes and making them doodley!

What’s next for The Doodle Man?

I’m continuing to work on big mural work and private commissions as well as taking over people’s toilets with doodles! I enjoy walking through London dressed up for a job and like it most when I’m given the freedom to paint outside, making my Doodle Man mark!